Rapid-Span has been selected by Westpro Infrastructure and the City of Calgary to fabricate the arched steel box girder option to replace the 12th Street S.E. Bridge (also known as the Calgary Zoo Bridge).

The current 12th Street bridge spans the Bow River on the south side of St. George’s Island and is in need of replacement due to its age and deteriorated physical condition.

The bridge, constructed in 1908, was originally designed to carry horse and buggy, as well as pedestrian traffic to St. George’s Island. Now it is an important link for vehicles and people on foot or bikes, which provides access to and from 9 Avenue S.E. to Memorial Drive and points south.

The city says the new bridge will be wider, safer, flood resistant and easier to maintain and will ensure this important link is maintained for the next 100 years. The overall budget for this bridge project is $19-million.

Update May 7, 2018: The bridge was completed and opened to the public in December 2017 and is an important link between the communities of Bridgeland and Inglewood.  Vehicle and pedestrian safety were key factors in the design of the bridge while taking into account future potential flooding levels. 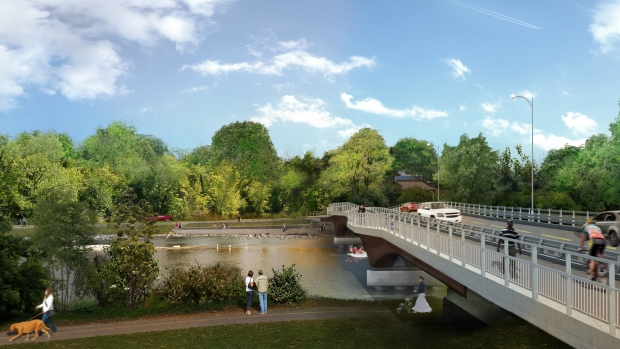